Get energy costs under control

2-store pilot (followed later by roll-out across all locations)

Boston area-based Not Your Average Joe’s (NYAJ), a fast growth, casual American style restaurant chain, had a lot of reasons to trim utility costs, but little available time or data to do so. Their high energy costs were driven by a multitude of energy intensive equipment. A review of monthly bills provided no clear plan of attack for reducing costs. Of special concern was one location, which was struggling to understand why their energy bills were so high, especially when compared to their peers.

The chain decided to try something new – and installed the SiteSage energy and asset management system from Powerhouse Dynamics. Systems were installed at both the high cost restaurant and one other location.

After gathering a few weeks of baseline data, a plan of attack became crystal clear. The data showed that there was a considerable amount of equipment being run when it did not need to be. For example, at one location all four exhaust fans and make-up air units were rarely being turned-off at night. The General Manager quickly identified that, in fact, the only nights they were being turned off were the nights he was responsible for shut down. By configuring SiteSage to send e-mail alerts to the managers when these fans were left running after close or turned on too early in the morning, the off-hours usage was dramatically reduced, recovering several thousand dollars in lost profits each year.

At the other location, the electric heat in the front vestibule was shown to be running 24/7. Management was surprised to learn how costly this equipment was to operate. With the detailed cost data in hand, management decided that the value delivered by this heater was so minimal that it could be turned-off completely without a negative impact. The savings were immediate and significant: over $1,000 per year of recovered profits.

Even More Savings Based on Equipment Scheduling

The granular data and alerts delivered by SiteSage also helped NYAJ better execute on an existing policy they believed made sense: turning down heat lamps during the afternoon lull. Although this practice was generally suspected to be worthwhile, no one knew how valuable it was, let alone whether it was being implemented on a consistent basis. SiteSage delivered the exact accounting of whether staff was following the procedure – and what it cost when they didn’t. With these pieces of the puzzle in place, another $1,500 a year was added to the bottom line.

Or consider the refrigerated beer line that carries beer from the walk-in cooler to the bar. When they discovered that this device cost $1,800 a year to operate, management did the ultimate taste test and determined that the units could be shut down for 12 hours per day, with a positive bottom line impact and no reduction in the taste or quality of the beer. All told, SiteSage delivered the precise information needed to track down well over $10,000 in savings per year from better equipment management practices across the 2 locations.

“A little over a year ago, we installed a system to monitor electricity usage and provide alerts to the GM for certain events in [2 locations]. At the end of the year, all restaurants had about a 6% drop in dollars as rates came down, but [the two pilot locations] saw a 15% and 17% drop, respectively. As a result of the success of that test, and the great enthusiasm from both [general managers], we have decided to roll this system through the remaining restaurants.”

Not Your Average Joe's CFO 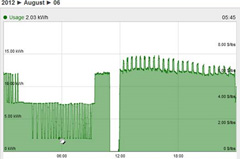 SiteSage’s ability to monitor and analyze equipment performance led to numerous occasions where the system identified equipment problems, resulting in intervention that both reduced energy cost and, potentially, increased the life of the equipment. For example, in the case shown here, a fan on a condenser coil was failing, which caused irregular energy use (the saw tooth pattern). This problem was identified via a system alert, and resolved quickly, which improved guest comfort, avoided a larger failure, and saved energy, all at the same time. 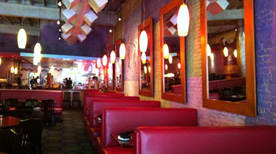 The SiteSage HVAC control solution provided another source of savings for NYAJ, and relieved a painful operational headache: constant changes to thermostat settings made by restaurant staff. The easy to use thermostat settings allowed NYAJ to micro-target comfort management to optimize guest experience and utility costs. Six time periods were established to avoid unnecessary cooling and heating at certain times of the day. SiteSage allowed the thermostats to be locked out so that change in set points is limited to authorized staff, who can easily change settings from anywhere via their smart phones.

The Numbers Speak for Themselves

Using a combination of SiteSage data and utility bills, NYAJ’s management was able to tally up the savings. Both restaurants saw their utility bills go down sharply. All told, management estimated that these initial SiteSage installations paid for themselves in about 9 months. This was clearly a strong enough return to motivate NYAJ to deploy SiteSage at all their other locations.