I generally try to keep politics out of things that I write. (Okay, maybe that is a gross exaggeration.). But, the recent barrage of the phrase “job killing regulations” has driven me over the edge – and reminded me of a very interesting graph I saw a couple of months back.

Which brings me to the graph, which is originally from the EPA, with credits for the pictures to Commissioner Kenneth Kimmell of the Massachusetts Department of Environmental Protection, whose presentation I saw. 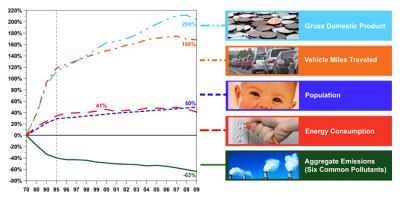 The graph charts gross domestic product and a range of other factors since the passage of the original Clean Air Act in 1970. The chart clearly shows that the Act did not damage the economy in any way, either in the short or long term. It certainly shows no evidence of being a “job killer”. I was unable to find any use of that term in 1970, which may predate its invention, but I vividly remember the political fights that went on around this act (which I guess dates me). The economy has managed just fine overall since then (current downturn notwithstanding), and emissions are way down – as are energy use per capita and per vehicle mile traveled (much of which is the result of other regulations).

The EPA has a posted a host of other fascinating statistics. For example, by 2008, environmental technology in the US was a $300B industry, generating over $40B in exports and about $20B in trade surplus – with over 100,000 companies involved employing 1.7 million people. A study by Resources for the Future (pdf) reports that employment actually goes up in companies that are required to meet environmental standards.

And, then there are the health benefits. Again quoting from the EPA, according to a 1997 EPA Report to Congress, the first 20 years of Clean Air Act programs led to the prevention of 205,000 premature deaths, 843,000 asthma attacks, and 18 million child respiratory illnesses in the year 1990. A March, 2011 peer reviewed EPA analysis shows that the Clean Air Act Amendments of 1990 prevented more than 160,000 premature deaths in 2010 alone, and are expected to prevent an estimated 230,000 deaths in 2020. This would mean that businesses and the economy would directly benefit from the prevention of 17 million work days lost that year.

This is not to say that all regulations are good for the economy (or for other purposes for that matter) or crafted appropriately – or that the Clean Air Act as amended is a perfect act; far from it. However, to suggest that all regulations are bad for jobs – especially while ignoring other potential benefits – is simply not supportable by any facts – and actually irresponsible. In fact, in the case of some regulations, the facts clearly spell out the opposite.

Okay, I got that out of my system. Next time, back to business.