In my last post I disclosed that I had just taken delivery of one of 700 all electric ActiveE’s that are being leased by BMW. The ActiveE is based on the 1-Series BMW. 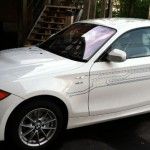 The ActiveE looks just like a BMW 1-Series, with the exception of the geeky lettering and circuit imagery they have stenciled on the car in order to make it stand out. All 700 of the cars are identical – you can get any color you want as long as it’s white.

The car does have a strange bump in the hood. I am not sure yet if it is there for a reason, or just for show, but plan to find out. The interior is identical to a gas-powered 1-Series, with heated leather seats. (The seat controls are manual though; anything to reduce battery draw, within very broad limits). 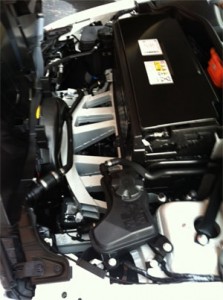 The engine compartment is pretty different – since there is no engine. A lot of the space is filled with the battery – which extends all the way to the trunk, where it also takes up a fair amount of space. 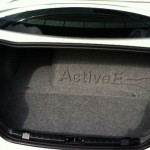 Otherwise, though, it is a standard BMW.

The ActiveE is eerily – and delightfully – silent. The only way you know it has started up is a gauge that shows “Ready”. There is virtually no motor sound while you are driving – just a very pleasant, quiet whine when you accelerate or decelerate (more on that in a minute). It feels a bit as if you are driving a golf cart – except that it is a full size, full speed, extremely comfortable car.

The acceleration is not as rapid as on my BMW 3-Series with a 6-speed manual transmission, but it is quite good and very smooth. Definitely better than the equivalent gasoline-powered car would be, especially one with an automatic transmission.

Deceleration is a whole new experience. BMW has introduced a regenerative braking system; as soon as you take your foot off the accelerator (no gas pedal here), the car starts to brake and the battery begins to recharge. This is similar to what you’ll find on the Prius, but at an entirely different level. Essentially, this is a one pedal system; you rarely need to touch the brake. I have heard that some people have had trouble adapting to it, but I found it intuitive – perhaps because I tend to drive that way in any event (much to the chagrin of my family).

Handling is also not as good as on my other BMW, which has fat performance tires and a performance suspension, but it is still quite good. (It is probably better in California, where BMW installed larger wheels and better tires than the wimpy all-weather tires they insisted on in the northeast). There is definitely road feel, but the suspension does a good job of absorbing bumps.

All and all, an extremely pleasant driving experience.

According to the marketing material, the ActiveE is supposed to go up to 100 miles on a single charge –although the car’s label says 94 miles. So far, I have yet to see the gauge project more than 82 miles – perhaps because I spent the first couple of days with a fairly heavy foot testing acceleration. I have not yet mastered the extreme driving mode that EV drivers are known for in order to maximize range. I will report back on what I experience once I have driven the car for several weeks.

There are 2 approaches to charging an EV. All EV makers recommend the installation of a charging station. Home stations charge the car at 240V – which is what is used for heavy home appliances like electric stoves and electric driers. The BMW ActiveE is supposed to take 5 hours to fully charge with a charging station. I plan to talk more about charging – both at home and away from home – in future posts.

But, there is a little known secret: you do not absolutely need a charging station. With an adaptor that comes with the car, you can plug it into a standard 120V outlet. It takes a lot longer to charge – but you can just plug it in and let it charge all night.

I did get a charging station, but it had not arrived when I took delivery of the car. So, for the first few nights, I just plugged it into an outlet in the garage.

One of the advantages of a charging station is that it measures the amount of energy being used to charge the car. But, my company makes an energy management system that monitors any circuit in a building, so I was able to see how much energy the car used even without the charging station. I grabbed this chart about an hour after I plugged the car in the first night. In the end, it took 4 hours to charge the battery, which was about 70{9e9e99e0aa33304967f3b3f95b41a9c8b857afbbbf6b3eae28bf86859e197ae9} charged when I started. This suggests 13.33 hours for a full charge at 120V, which is about what I expected.

The car drew 1,400 watts of power while it charged. We pay 15 cents per kW hour (well above the national average of about 10.5 cents), which means the car cost 21 cents per hour to charge, or $2.80 for a full charge. If the car actually could get 94 miles on a charge, that would imply a cost of about $.03 per mile. From a cost perspective, that’s the equivalent of 133 miles per gallon at $4 per gallon for a gas-powered car; not too shabby! Even at a more realistic 82 miles range, that would be the equivalent of 116 miles per gallon, from a cost perspective. This is a bit higher than the EPA rated 102 mpg overall (107 in city traffic) environmental equivalence. But, this was based on only a single measurement, and the projected kilowatt hours to fully charge the car was below the specifications, so the jury is still out.

I plan to monitor several more days of charging performance – and see what happens with the charging station – before reaching any real conclusions. But, if this data remains consistent, assuming I drove 6,000 miles per year (the 94 mile range limits how far you can really drive the car a year – since long trips are largely out), even at the lower level the operating savings over my current car amount to about $800 per year. (EPA projects $7,500 in fuel cost savings over 5 years, but that is based on the lower average US electric rate, and more miles per year of driving). Not enough, yet, to make up for the extra cost of an EV. But, not a bad start.

My biggest issue is getting used to NOT shifting gears. (Yes, I am an old-timer that still loves a stick shift). There ARE NO gears on an electric vehicle; they have a direct drive system with a fixed transmission ratio.

Aside from that; he likes it, he really likes it.