I am not generally an early adopter. I am a geek, but a cautious one that typically waits until the 2nd or 3rd generation before acquiring new technology.

I began lusting for a Tesla Roadster the first time I read about the car long before its debut, perhaps 5 years ago. Having spent the first part of my career focused on transportation and the past 15 years on energy efficiency, electric vehicles (EVs) are a natural for me. I believe that they can play a major role in terms of both addressing environmental and climate change issues and enhancing national security, by lessening and ultimately eliminating our need for foreign oil. Moreover, electric motors are much simpler than internal combustion engines, and it should (will) be much cheaper to operate and maintain an EV than a gasoline –powered car.

I get very frustrated when I hear the naysayers who belittle the concept – “the batteries are too expensive; the range is too limited; charging is too slow; there is no infrastructure”. All of these, of course, are totally true; but similar issues are true of many new technologies. Flat panel TVs cost $10,000 when they first came out; I paid $4,000 for my first one (3rd generation), for a set that would now cost about $500. There was no infrastructure to speak of when automobiles made their debut; no filling stations and few suitable roads. If EVs are to become a viable technology, we need to research them, buy them and try them. That is the only way to get the costs down, the range up, the charging time down, and the infrastructure built – all of which is already starting to happen.

So, I was delighted when I heard about BMW’s plans to lease the ActiveE – an all-electric version of the 1-Series – to 700 people in 5 states on a first come first served basis. This car has the prototype drive train of a built-from-the-ground-up EV BMW is planning to release in 2014. This totally changed the dynamics for me. First of all, the car is being offered and supported by BMW, not a start-up. Second of all, it is only a 2 year, relatively low cost commitment. At the end of the 2 years, you just give it back. 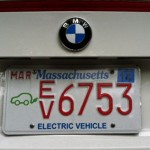 I am a perfect candidate for an electric car. I have a 3.5 mile commute and live only 6 miles from downtown Boston and about 10 miles from the airport. Therefore, I should rarely if ever suffer from “range anxiety” (at least if we ignore that pesky summer house 95 miles away). And, I seem to fit the prototype EV early adopter profile suggested in a NY Times Op Ed piece a couple of months back; a techie guy (yes, most of the people who get these cars are guys) who is well off enough to keep their old car – for when they need it.

Yet, despite the obvious (to me) logic of moving forward, my natural reticence made me procrastinate long enough to miss the initial pool of 700 lessees. I was wait-listed for several weeks, and then told I was allocated a car – number 700 in fact. (For those who were also on the wait list but did not get a car, now you know who got the last one). I was asked to swear right then and there that I would take delivery. Which, I just did.

I plan to post several blogs about the car as I gain experience with it, so stay tuned.