There’s a better way to manage your equipment, energy, and operations
By Martin Flusberg, President
Share this post
Food Safety is a serious issue. An estimated 1 in 6 (48 million) Americans get sick from foodborne illness each year, resulting in roughly 128,000 hospitalizations and 3,000 deaths, according to the Centers for Disease Control and Prevention. The issue has finally begun to get the attention it deserves, at both the government level and in the food services industry itself. There were 3 totally independent – and yet related – food safety events in September.

The first was the announcement by the Food and Drug Administration on September 15 that it had finalized two of the seven proposed sets of rules under the Food Safety Modernization Act (FSMA): the Preventive Controls for Human Food rule and the Preventive Controls for Animal Food rule. The new rules require human and animal food facilities (farms and food production facilities) to develop and implement written food safety plans that indicate the possible problems that could affect the safety of their products, and outline steps to take to minimize these risks. These rules will be phased in over several years based on company size, starting in September 2016. Key steps addressed by the rules are: 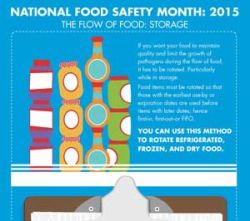 Second was a month-long event: the National Restaurant Association’s (NRA’s) National Food Safety Month. National Food Safety Month (NFSM) was created by the NRA in 1994 to heighten awareness of food safety education. Each year the NRA selects a new theme and offers free training materials for the food services industry to help reinforce proper food safety practices and procedures. This year’s theme was “Let It Flow,” focusing on the flow of food through restaurants. Previous NSFM’s have included additional education efforts aimed at home kitchens. The US Department of Agriculture and the Centers for Disease Control and Prevention promote September as National Food Safety Education Month and offer resources and information related to food-borne illness and food safety. In keeping with the month’s focus on food safety, in September Powerhouse Dynamics released the latest module in its SiteSage® Enterprise Energy & Asset Management platform: SiteSage Smart Kitchen.

SiteSage Smart Kitchen continuously monitors temperature and other key food safety indicators in commercial refrigeration and food preparation equipment – including ovens and food warmers – and provides real-time alerts about issues that might compromise food safety or food quality. It also automates the time consuming and error prone process of generating Food Safety reports (required under the FDA’s Hazard Analysis Critical Control Points – or HACCP program). This module is aimed primarily at restaurants but is also appropriate for schools and other organizations with commercial kitchens, as well as convenience stores, which are quickly morphing into quick serve restaurants and also have a considerable amount of refrigeration equipment. SiteSage Smart Kitchen is aimed at enhancing food safety, but also preserves food quality and reduces cost at the same time. Food safety has been receiving a great deal of attention in September, but there is a lot more that can be done. With the advent of low cost, often wireless sensors and cloud-based computing, there is no longer any reason that every food service organization, regardless of size, cannot implement continuous monitoring as part of a comprehensive food safety program – something only a minority of such organizations have done so to-date. As more of these programs are introduced, we can expect to see foodborne illnesses and resulting deaths continue to decline.

Interested in learning the latest in restaurant food safety best practices? Watch our webinar on Food Safety and the Internet of Things.