I live in a 70-year-old house just north of Boston. I’ve mentioned in a previous post some of the things I’ve done to try to reduce energy consumption in my home, including changing the operating mode of the dehumidifier in my basement so it runs less frequently but still maintains the proper humidity. Now that summer is in full-swing again here in Boston, my thoughts on energy consumption in my home are drawn to air conditioning and the dehumidifier. 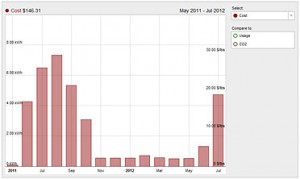 The dehumidifier in my basement does its job – keeping the humidity to a low enough level to make my basement (which is finished and serves as our family room) comfortable and free of that funky smell and mold that can plague such damp spaces.

But that darn appliance still bothers me. It’s noisy, and it still adds a decent amount of cost to my summer energy bill, despite measures I took last year to reduce its consumption.

Putting it to the Test

This week, I decided to take the data from my eMonitor to see how much energy the dehumidifier is actually consuming versus its specifications. 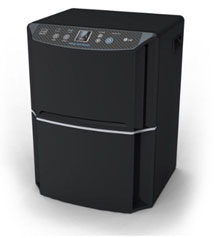 When I bought the dehumidifier in 2009 – an LG model LD650EAL (couldn’t they have come up with a better name?) – it was designated an Energy Star appliance, since it met the efficiency metric of at least 1.8 liters of water produced per kWh of electricity consumed. Energy Star tightened its requirements in 2012 to 1.85 l/kWh, so my dehumidifier is no longer designated as Energy Star. But, there’s no point in upgrading, since it was fairly expensive to purchase, it still does its job, and isn’t that far off Energy Star spec, right?

To see how much energy the unit is actually consuming, I looked at the eMonitor run-time data for 10 full dehumidification cycles – from empty water bin to full water bin – for the month of July. The eMonitor data clearly shows when a cycle starts and stops and how much energy it uses during this period.

When the unit is running, it looks like this: 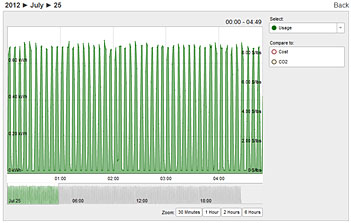 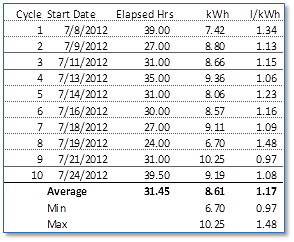 So, how has my unit performed?

In a word: poorly.

Even on its best cycle of the 10 I measured, the unit still never reached its specified efficiency level. I recognize this is hardly a scientific test, but I was surprised by how far below the unit performed against its stated spec even in my limited sample.

My eMonitor tells me I spent about $112 in electricity for my dehumidifier in the past year. If I bought a new unit that actually met spec so I could reduce electricity consumption for dehumidifying my basement by 54{9e9e99e0aa33304967f3b3f95b41a9c8b857afbbbf6b3eae28bf86859e197ae9}, would this be a wise investment?

Let’s look at the numbers:

This says that if I were to purchase a new dehumidifier that actually performed at the specified 1.8 l / kWh, it would save me just over $60 per year. If a new dehumidifier of similar capacity to the one I currently own cost me $249 (e.g., Danby’s DDR70A1GP 70 pt unit), I would get my money back in just over 4 years, which is equivalent to an Internal Rate of Return of 15{9e9e99e0aa33304967f3b3f95b41a9c8b857afbbbf6b3eae28bf86859e197ae9}. (We have no affiliation with Danby – the model I chose for comparison just happens to be a model of similar capacity and specifications to my current unit).

This isn’t a super-exciting return, but it isn’t horrible, either. Of course, everything hinges on the new unit actually performing to spec, and I have no reason to believe it has either a better or worse chance of this than my current unit.

This is just another data point demonstrating that a manufacturer’s specification can be vastly different than how a unit performs in the real world, especially when it comes to energy consumption.