As a cleantech entrepreneur and investor, I know how hard it is to start a company, launch a product, and prove value to the market. I had admired Powerhouse Dynamics for some time from the outside, and when I had the good fortune to be able to join the company in May of 2011, I jumped.

One of the first things we do with any new employee at Powerhouse Dynamics is to have them install and begin using SiteSage (formerly eMonitor). When I received my units, I believed I would achieve real but modest savings. After all, I have had a life-long passion for energy efficiency and renewable energy. I pay attention to my energy consumption. I turn off lights. I make my children turn off their lights.

So how has my own experience with SiteSage been so far? Two words: surprisingly good.

Why was it surprising? Because I’ve saved more than what I would consider a modest amount. Recently, I looked at the last three years’ worth of electricity consumption for my house and averaged the kWh consumption for all three Mays, Junes, Julys, etc. 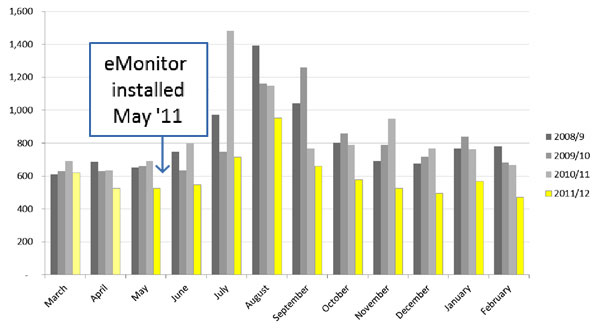 How have I been able to achieve these savings?

I’d like to say it was just a few major items, but in reality, it’s simply paying attention to a lot of small things. It’s amazing how having granular information on the specific costs of various appliances throughout my house can affect my family’s focus in a positive way.

For example, we discovered that the dehumidifier we run in our basement during the summer months was consuming nearly as much electricity as our air conditioning system. We also learned there was a different operating mode for the dehumidifier that allowed us to achieve the same level of humidity in the basement but significantly reducing the system’s run time and cost.

We also learned how expensive it can be to run our electric stove. So, we try to cook several dishes at once when using the oven. If we’re cooking a small dish, we can use the toaster oven instead, which uses less energy.

Finally, I found a number of devices consuming phantom power that I eliminated using power strips with switches. The worst offender was my set-top box, which was consuming 30 watts when “off”. This translates into only about $36 per year, but as I said, it is a lot of little things that add up.

As someone who thought he was doing pretty well energy-wise (after all, I had already converted all lights in my home to either CFLs or LEDs), I have to admit that SiteSage showed me – and guided me – to finding a substantial amount of additional savings. It’s been a great learning tool for me so far, and I’m continuing to learn more about where my family can continue to save money on utilities.